This is a question I hear over and over again. Any handpan facebook group will also see this question asked by someone just discovering handpans on almost a daily basis and the answer is always the same.

This is not the end of the search for a cheap handpan however. Handpans are often confused with Tongue drums which work on a similar principle but are, let’s say, ‘more affordable’. If you are looking for a new instrument for under $1000 I might suggest taking a look at the Tongue Drum section for more information.

Read on for a cheap Handpan price guide and what to expect. And what to avoid!

What is a Cheap Handpan Price

For the purpose of this article, I am going to use ‘under $1000’ as the definition of cheap. I present some table guides as to what to expect to pay for a second-hand handpan.

I will also use under $500 for a new handpan as a no-go territory in any circumstance given the feedback on those that have purchased in this price range.

Below I present a table that provides a ‘rough’ guide to handpan prices both new and second hand, and what regions to look for. Also, included is what to expect for the varying price bands.

The best handpans have never been ‘cheap’ up to now. Not if cheap is anything less than $1000.

Where to Buy a Cheap Handpan?

You will have no trouble finding a cheap handpan for sale if you look around the internet.

Searching and browsing for cheaper options in the retail world is all well and good, but there are certain products you should be very careful with. handpans, certainly being one.

There is an age-old saying that goes, ‘you get what you pay for’. There can be exceptions to the rule but rarely where handpans are concerned.

Yes, these handpans are available at cheap prices but can also be categorized

One has to be careful when claiming a scam, but all the evidence, in this case, points in that direction

Handpan scam sales are rife on Facebook. Extremely cheap handpans are offered, accompanied by videos of respected handpan players playing famous, high-quality brand handpans, and photos of other branded handpans. Hugely appealing at first glance, a little investigation into the website link and the comments section reveals the horrors.

These are example comments from a single facebook advertisement offering handpans at less than $300.

Without exception not a single comment I could find confirmed even delivery of the product. The comments above were from an advert thread where I had previously left dozens of warnings to potential buyers.

A click on the link to the store landed on an empty domain page. Meaning either the website has been taken down by the host or the people running it had closed shop and disappeared. A tragedy when seeing thousands of dollars paid to what is now a non-entity with no confirmation of a handpan ever being delivered.

When buying from an online store, ensure the website is secure. Make sure there is a business address and contact details and try to double check to see if that business actually exists in the physical world and not just on the internet.

Unfortunately, all of the signs of a handpan scam were apparent. When live, the website, offered no security for payments. No business details or contact information and photographs of PANArt and TerraTonz Handpans. The accompanying video was of a different handpan to that which was for sale, and the player, Sam Maher, had certainly not given permission for his video to be used to advertise the product.

People looking to buy cheap handpans have been taken advantage of and have made payments to an untraceable entity with little to no hope of ever receiving their handpans.

With the growing demand for handpans, it is inevitable that cheaper, mass-produced items will come to market and in 2019 we have seen exponential growth in the availability of new handpans for under $1000.

I can not confirm the production method of these instruments but one can only imagine either cheap labor or machine production is employed to produce vast quantities of inferior sounding handpans.

They are being shipped to Europe and the US, often from direct sales, or importers looking to make a buck in a growing market

Ok, so the E is really out of tune. The high A is quite hard to play and the high C is almost impossible to get some volume, it’s really friggin stiff.

It sounds a bit like this. We have Deniz Kavafoglu here; an excellent handpan player, making this instrument sound about as good as it can be. Bear in mind, however, this cheap handpan is being played for the first time and two of the tone fields are already out of tune on the first play and a third, the A, is difficult to sound.

Unlike a guitar, for example, where an entry-level instrument is fine whilst learning the ropes with the option to upgrade as you become a better player, handpan playing progress will come quickly and you will soon want to buy a better handpan. With handpan costs, this is not quite as affordable as upgrading guitars.

Has the Price of Cheap Handpans Increased?

That is, without doubt, the case as popularity has risen. Consider that a PANArt Hang would never have cost more than $1200 new from the producer but in some cases has risen to over $10,000 in the second-hand market because of the desire to own one and its rarity. Only around 4500 were ever made in their various generations. In fact, at the time, you could have bought a first-generation original brand new for around $600.

What is the ‘Right’ Price for a Good Handpan?

The right price for a hanpan is an amount you can comfortably afford in the first instance. If you are saving and just can’t wait to buy, but only have $1000, try as hard as you can to be patient.

Heed this advice, save another $1000 and ensure you are buying a good quality handpan that will last for years.

Another advantage of not buying a cheap handpan is tuning. Such is the false economy of a cheap handpan, you will find yourself forever needing to have it retuned. This will be required far more frequently than with a good quality handpan and will have associated costs.

How to Retune a Cheap Handpan

This is going to add to the cost of your cheap handpan, and will probably at best equal the price of a good quality one, or worst case, continue to cost you to a point where your cheap handpan has now cost more than if you had paid more for a better one.

Find someone to retune your cheap handpan

The first hurdle is finding someone who will retune it for you. This may not be as easy as you would think. There are only around 100 handpan creators in the world at the time of writing, so the chances are, you may be a fair distance from one.

Even then, your nearest creator may not want to retune your handpan, and you’ll have to travel further afield for a remedy.

How much does it cost to retune a cheap handpan?

Here we assume you have found someone willing to undertake the retuning. On average, you would be looking at a cost of around $100 for a standard 7/8/9 note handpan, which is what your cheap handpan probably offers.

Because of the poor quality of the steel [if indeed it is steel] used in making your cheap handpan, it will require retuning often. Perhaps several times a year.

Let’s say you need to spend $100 on the retune and a similar amount on travel each time, thats $200 per retune.

Repeat that 5 times, and you have spent the additional $1000 with which you could have secured an excellent quality, long-lasting, handpan. And you may, should you swallow the monotony, have to make this many retunes in under 2 years.

Now you can see, waiting that little longer or spending that extra money on avoiding a cheap handpan will pay off in the long run.

AND – A handpan will not devalue rapidly, so you will lose little if you decide to sell later down the line.

I hope this information has been helpful, and if you know of anyone considering buying a cheap handpan, please share this info on social media to spread the word. 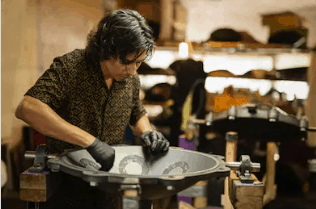 Due to the manipulation of the nitrided steel into a specific shape, it has dimples tuned to a diatonic scale. When struck, the dimples sound the notes. The sound is created by affecting the air inside, released via a hole located in the bottom half of the pan. The pre-owned, second-hand handpan market is a great place to be right now. Maybe not for owners or manufacturers but if you are looking to buy your first handpan, now is the time. Where to buy a second-hand handpan? – When buying a second hand handpan the most likely place you will find one online…. When I first got interested in handpans, I thought I wanted as many notes as possible to increase the variety of what I could play. I was wrong! How many notes are there on a handpan? – The original PANArt Hang had 8 notes. Further development, experimentation, and evolution of the handpan has witnessed other…